LAMPers reflect on challenges of postponed Little 500 with positive attitude

Indiana University’s Little 500 races looked very different this year. Instead of the typical hundreds in attendance for the largest collegiate bike race in the country, riders rode in an almost-empty stadium. On Wednesday, May 26th, 2021 only riders, organizers, coaches, and mechanics gathered in Bill Armstrong stadium. A few fans, families, and friends stood around the perimeter fence to cheer riders and watch from afar. Most families and fans watched the men and women’s races virtually over livestream.

Last year, the 2020 men and women’s races were called off completely, as the April race date fell during mandated lockdowns. This year, the fate of the race was unclear. Still, riders continued to train, and the IU Student Foundation continued with tentative plans for the race.

On March 4th, about a month and a half ahead of the scheduled April 23rd and 24th women and men’s races, the IUSF announced that the races would be pushed back to Wednesday, May 26th at noon and 4 p.m. “Our goal was to first and foremost keep students, as well as the campus and Bloomington communities safe, while allowing for this time-honored tradition to take place in 2021,” the official IU email to riders said.

Coming after more than a year of canceled events, on-line everything, and hundreds of thousands of COVID-related deaths, the new guidelines were a comparatively minor shift. But for riders who had been training for a year or more, this change was a lot to process.

Recent LAMP alumna and Steering Committee member Willa Sasso (Biology and LAMP certificate, 2020) put it this way: “Many have voiced complaints or worries about the way the race is happening this year, but the bottom line is that the race IS happening, which is a win for us all. When Hoosiers think of the race, they picture the excitement of race weekend, the decorations, and the festivities. But the Little 500 runs so much deeper than that. Student athletes pour an entire year's worth of training into preparing for race day, ticket sales fund crucial student-to-student scholarships, and the history behind the weekend keeps alumni connected to the school for years to come.”

“While this year did not include in-person fans, IUSF realized the importance of what this race means to the IU community and found a way to make it happen despite endless hurdles,” Sasso said.

The new race date in late May was three weeks after Commencement weekend, creating conflicts for riders who had summer internships or jobs to start. Some riders had already left town because they had nowhere in Bloomington to live after the end of the semester. “When you move a race to May 26th on a Wednesday, you're going to have a lot of teams that during a normal year would be able to participate, but [now they can’t],” Murray said.

“Theta Chi for example, they only had two riders in the race this year. I commend both of them - racing just to keep the tradition alive for their house,” Murray continued. “There would have been more teams fielded for both the men’s and women’s events had they kept the original date or at least moved the new date to a weekend.”

Riders had tailored their training for a mid-April peak, which also became a challenge when the race was pushed to late May. “When you do your training, you try to peak your fitness just before the race,” Chinthala explained. “With that extra month, you have to change your whole training plan, and figure out ‘ok, so how do I keep training without fatiguing myself?’ It also made it difficult for other coaches and mechanics because those are usually alumni, but [they] have jobs and it’s more difficult to come down on a Wednesday.”

The shared facilities, track material, and COVID-restricted training schedule created further logistical hurdles. According to Chinthala, the Rider’s Council also had to deal with sharing the track with the soccer team. “Usually, the soccer team plays in the fall, so there isn’t an issue. But because of COVID, their season was pushed to spring. So we had to work with the soccer team to figure out how we can still have enough track time for all of the teams to train safely, while following the COVID protocols, and respecting the soccer schedule.”

He continued, “The biggest thing was to make sure the track conditions were safe to race. The track is made of cinders, which is like lava rock. It’s a very specific material. I guess you can’t even ship it anymore. There’s a lot of maintenance that goes into the track and it has to be done every single day. If it doesn’t rain for a week, you have to water the track. If it rains too much, you have to make sure it can dry. And if it snows or freezes, then it’s unsafe, too.”

Chinthala and Murray explained that usually, there is more time for track maintenance between the women’s and men’s races, because they are typically held on a Friday and Saturday, respectively. This year, the two races were just a couple of hours apart. “They had the women’s and men’s races on the same day. That never happens. So the problem is that the track gets very loose and dry. They did their best to try to roll it and make it flat again, but it just gets so loose. Based on the dryness of the track, it can be easy to fishtail on turns,” said Chinthala. For Murray, this unfortunately resulted in an accident on lap 198 out of 200 of the race.

Murray recounted what happened on race day. “There were about 10 teams on the lead lap going into 198. Fiji (Phi Gamma Delta) came around on the outside. We’re headed into the straight and it was really, really dry on the track. He lost his traction and slid. He took out the rest of the field, including myself. There were only three [leading] teams out of that group that made it out of that crash unscathed and into the final two laps.”

Murray spoke to the challenge of riding without the usual race-day audience. “When they first announced that there would be no fans, we were pretty bummed. But our coaches reminded us that when you race, you don’t remember anything about the crowd being there - I remember my teammates being there, and my coaches being there. We’re biking for ourselves. And a lot of our friends were able to stream it to, which was helpful.”

Dorsey and the Steering Committee members had to shift their mindset as well. “Initially, it took a little while for us to adjust to knowing we would need to be here all of May, because in our minds we were going to graduate and it would be over. But then I think it actually helped us because we stayed in Bloomington a bit longer and we got a lot closer. Up to that point, we had been the only Steering Committee that had never been in the same room, just doing our meetings virtually throughout the year.”

2021 LAMP graduate Jane Dorsey with the IUSF 2020-2021 Steering Committee. Dorsey is in the second row, second from left. Dorsey graduated with the Management + Human Organization major this year and is starting her career in marketing in Chicago.

Still, Chinthala, Murray, Keiser and Dorsey maintained a positive attitude and learned from the experience in characteristic LAMPer fashion. “Leading up to the race, with that extra month actually really helped because I was able to train the guys a lot about strategy,” Chinthala said, noting his own fraternity’s team is only a few years old. “We spent a lot of time looking at old race tapes and talking about strategy.”

All three LAMPers also spoke to the long-term benefits of participating in the Little 500. As a member of the Steering Committee, Dorsey feels she had many opportunities to grow as a leader and team member. “I would definitely say that I grew in my ability to lead a group of people, especially during the unknown – trying to stay patient, efficient, and positive. I’m a lot better now when working with others and understanding other people’s viewpoints.”

Dorsey also draws a parallel to the LAMP community, which brings students together from many different backgrounds and interests. “That was a really cool part. I was in a sorority at IU and had a lot of similar friends with similar backgrounds. So going into IUSF I was like ‘Wow, this is really unique. The campus is so big, I’m meeting people from all over the place that are so different from me.’ Getting to work with them is really neat, and the LAMP saying ‘one perspective is never enough’ definitely comes into play.”

As team captains, Murray, Chinthala, and Keiser spoke to their development as leaders. Murray shares, “I think I’ve grown a lot as a leader. Our team has a lot of personalities, and we’ve all gotten a lot better at communicating with each other. As a leader, understanding how each respective member interacts with the world and how they best perceive criticism is something I’ve become a lot more sensitive to. That’s something that I think is really valuable, because you want to try to get the best out of people.”

Chinthala felt similarly. “I gained my closest friends for the rest of my life. My teammates are the guys who are going to be in my wedding. I learned a lot about myself – time management, how to motivate others and keep people interested.”

All three riders shared experiences of growing close to their alumni networks, learning about team budgets, and balancing academics, extracurriculars, and training. “Even during the early mornings and late nights, I told myself that I came to IU to leave an impact – to leave my footprint,” Chinthala said. “If you’re really dedicated, passionate, you’ll figure out a way to do it. And I’m not the only one who thinks this way – it’s the whole Little 500 community.”

For Keiser, the race was challenging, but he looks forward to improving with his team throughout the next two years. “We had an especially difficult time on race day…three out of our four riders were rookies. The track conditions on race day were abysmal, plus our team couldn’t attend track practice in the six weeks leading up to the race (because our fraternity faced conduct review). Despite these challenges, our team had a great learning experience, and we met many friendly alumni.”

LAMP student Clay Keiser (right) with his team and coach, following the 2021 race. Keiser rode with his fraternity team, Acacia. His team came in 14th.

When asked if they would continue cycling post-grad, all of the riders responded enthusiastically. “I mean, I love biking. I’ve put so much time and money into it. So yeah, I will definitely continue. I might ride a bit more leisurely now, but I’ll definitely continue,” Chinthala, who will be attending the IU School of Medicine this fall, said. He also plans to help coach his team in the years to come.

Murray, who plans to ride in the race in 2022 as a senior, says, “I hope I am a lifelong cyclist. The thing that really stands out to me is the importance of exercise. And getting outside.” And Keiser, a rising junior, adds, “I plan to keep riding. The Little 500 sets you up so well to make lifelong connections and live a health life.”

Dorsey, Chinthala, Keiser and Murray all say they plan to attend or watch the Little 500 races next year, and are glad they were able to carry on the tradition this year, even though it looked much different than usual. “The work that both IUSF and riders put into this strange year helped ensure the continuation of ‘The World's Greatest College Weekend’ for years to come,” Sasso said.

The Little 500 bycicles hanging in storage, ready for next year. 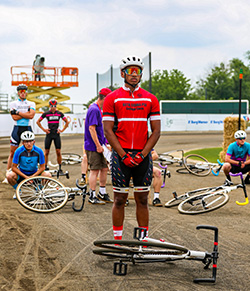