Misha Rekhter is a junior in LAMP's honors certificate program, majoring in Behavorial Economics, minoring in Creative Writing, and a member of Kelley's Consulting Workshop. He joined LAMP because he wanted to apply academic concepts to business and learn to approach problem solving with different perspectives. While most students wait until graduation to apply their coursework in the real world, Rekhter began in his sophomore year when he co-founded Trap Mike’s Late-Night Food Market.

Trap Mike’s was a Bloomington delivery and late-night only restaurant. The idea for this business came after Rekhter and his friends realized that without a car, nighttime food options in town were limited. To test this idea, Rekhter and his co-founder cooked some food, pieced together menus, and started taking delivery orders: a simple bare-bones version of their business model. Rekhter refers to that first version of Trap Mike’s as the MVP, or minimum viable product (MVP).

The concept and MVP for Trap Mike’s was simple, but it eventually led Rekhter and his team to scale up after IU’s student body demonstrated strong demand for late-night food. In early February 2021, they officially launched Trap Mike’s complete with employees, a mobile app, and a DoorDash listing. It quickly became a popular eatery around the IU campus, and the Indiana Daily Student reported that three weeks after its opening, they were averaging 100 orders a night.

The success of Trap Mike’s taught Rekhter how to build a team, test ideas, and manage an organization. However, Rekhter also learned important lessons from its difficulties. In November of last year, Trap Mike’s closed due to a nationwide labor shortage. “[Trap Mike’s] was a huge playground for my ideas” reflects Rekhter on the closing of his business, “but it was also infinitely harder than I could’ve imagined.” For him, the greatest challenge of being an entrepreneur came from the weight of coordinating his team and making decisions for the business.

Today, Rekhter is using his academic courses and a sustainability initiative to continue to develop his business acumen and explore new areas of focus. This semester, he is taking the LAMP class BUS X-333 “Managing Business Functions” with Professor Sara Cochran. The course teaches the basic principles of successful entrepreneurship and business management. Although he has experienced many of the concepts being taught, Rekhter has found that the class resonates with his experiences and pushed him to reflect more deeply on lessons learned from Trap Mike’s.

Although no longer slinging late-night grub across Bloomington, Rekhter’s current focus on sustainability provides him an outlet for his problem-solving and entrepreneurial spirit. Since for Rekhter it's never business as usual, we can count on more creative ideas in the future.

Thank you to Misha Rekhter for telling us about his experiences in LAMP! If you are a current LAMP or MHO with an interesting experience to share, feel free to email us at lamp@indiana.edu. 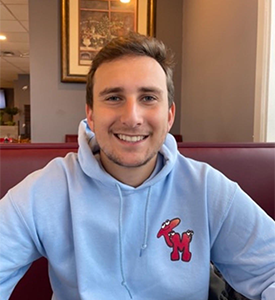